Just a couple of photo's of our stand at the de Havilland aircraft museum at London Colney, St Albans on the 29th May. The stand showed most of the DH products from the companies history. It also showed the DH aircraft that were used in the 1956 and the later Antarctic expeditions. I also showed the 1934 England to Australia air race that was of course won by the de Havilland Comet. Several Chipmunks, Dragon Rapides and Express airliners were also displayed.
The setting was perfect as it was part of the permanent museum display.
Terry 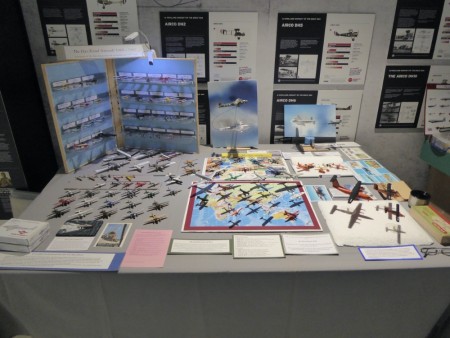 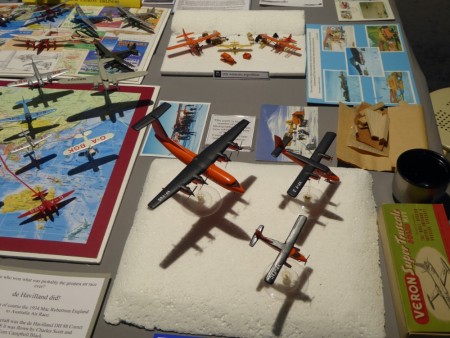 That is incredible! I would dearly love to be able to see this collection in person. It must have taken years of effort to produce.
Top

Hi Brendon, thank you for the complements,
I don't really know when I built my first 1/144th DH model, I would think it would have been well over 50 years ago. I have always thought that de Havilland aircraft are attractive, the Albatros and the early Comets must be the most attractive four engine airliners ever. I am a little ashamed to say that I have yet to do the Drover.
Most of my models are in wood, but some of them have been used as masters for silicon mould making thus allowing multiple resin copies to be cast.
My other series include British 'experimental and prototype aircraft', 'Helicopters', 'flying training aircraft', 'between the wars aircraft', and several others.
Glad you liked them, Terry.
Top

what a superb display! - space limits at 'ordinary' shows rarely give us this depth of specialist coverage on a particular theme and it's a joy to see them all together.

And what a setting - I gather the museum has had some improvements in recent years - I was last there maybe ten years ago and it was pretty good then.

Great demonstration of what can be achieved in our scale - thanks for putting it on Terry (not to mention half-a-century of hard work!)
Top

Thank you Brendan, David and Mike, we certainly received a great deal of attention.
Terry
Top

TerryP wrote: ↑Sat Jun 25, 2022 8:35 pm ....I am a little ashamed to say that I have yet to do the Drover.
Most of my models are in wood, but some of them have been used as masters for silicon mould making thus allowing multiple resin copies to be cast.

What ???? There is not the Drover, THE missing link among the trimotors.....

What ???? And where are the resin models based on these masters? And what are they?

And are there any plans to make new resin castings soon?

Congratulations Terry, very very beautiful collection, which I regret not having been able to see....
Top
Post Reply
7 posts • Page 1 of 1