So like many of my vignettes, this one started completely unplanned. I picked up the Mark 1 F104 two seater double pack with the intention of making one in Pakistani colours, then looking at the other schemes available noticed the Tiger Meet/RIAT 1991 scheme. Some research showed the plane alongside a Fouga Magister (and I think an Alpha Jet), so of course I had to recreate the scene. 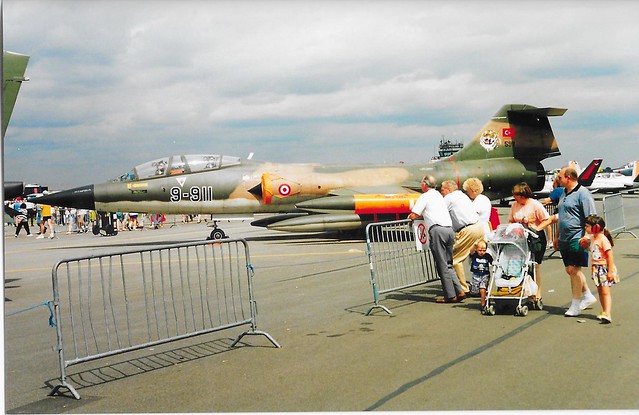 Some reference images I found, shared from the photographers Flickr pages in accordance with their sharing settings.

The Revell/Mark 1 Starfighter was a lovely build and fun paintwork. I sprayed the frame with rattle can Tamiya orange, then hand painted the rest - no masking used. Only addition was some chocks and a cover on the pitot in accordance with photos.

The Magister is a Miniwing resin kit, my first full resin kit. A nice easy build, I even used the vacform canopy. A few minor additions, I added the (vent?) to the canopy top and something red on the front (a 'remove before flight' tag?).

As with the Starfighter, I sprayed the airframe orange, then brush painted the metallics over the top freehand. The decals had to be adapted - I used some I94 10mm tank numbers and letters, while the unit symbol was a closest match from the stash.

Fencing is from Brengun, lovely brass pieces and it was only when I found these that I knew I had to make this scene. Figures are Presier 1/160 - but provided you don't put them alongside 144th people, the difference is not noticable and the poses were perfect. Notice the kids playing with toy planes, these were carved from sprue parts.