Further to teddybears "spotters quiz" I thought I would submit one. Recently I have found motivation hard to come by and I haven't painted anythings for well over a year. Well I very recently bought a tin of primer and went mad. Everything in my shed is grey now. A clue- only one of them isn't British. 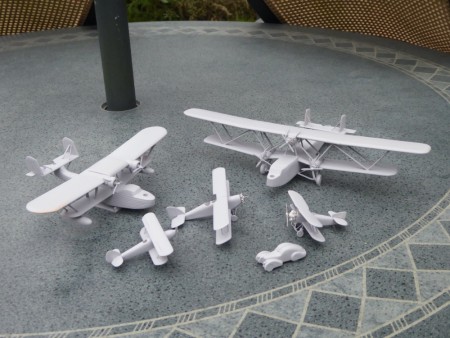 on the first line :
Hawker Hart or Hind and Bugatti 57S ?

the big one on the left : Saro London?

Well done Teddybeer, you got the big ones right and I'm glad to say also the Bugatti, but the little ones are from left to right the Hawker Fury, Westland Wapiti and Fairey Flycatcher.
I've always wanted to do a Wapiti because one of my RAF instructors was a Gurkha and he would tell the class that he remembered see Wapitis flying over, well of course this brought totally blank faces from almost everybody in the class. I smiled.
Top

Hahhh ...., the Hawker Family of the interwar period has always made me dream : Hart, Demon, Hind, Fury ...
In addition to the design of their fuselage, what made you dream even more was this sky police from the RAF to the borders of the Empire ....
Sorry, sometimes I get lyrical ....

But you wouldn't want to make it a kit for sale, like the Q6 Petrel ....?
Because there is no such model on the market and that's a shame....

Well Teddybeer I agree, I think the Fury is the best looking biplane fighter ever. On the other hand I think that de Havilland built the most beautiful aircraft of any company. They built the Express, the Albatros and the Comet, surely the most attractive airliners each from a different era.
The one recently painted model that I didn't show is my Handley Page V/1500, I built it several years ago but never got round to painting it, well now at least it has an initial coat. Your comment about policing the empire caused me to mention it. It was called the Berlin bomber because it was intended that it would bomb Berlin from a base near Prague, as it happens the war was over before it could be used in this role.
However the V/1500 did carry out one operational sortie, this aircraft C9700 was sent to intervene in Afghan hostilities on the North West Frontier, if possible by bombing the rebellious Amir Amanullah's strong hold at Kabul. It had been judged incapable of climbing over the Kybur Pass with a bomb load. But a tail wind helped it on its way and its reduced weight after bombing allowed it to make the return journey.
The sortie was successful, it scored direct hits on the Amirs arsenal, it also breached the outer walls of the harem. At a later conference the Afghans were reported to have been 'very much impressed' and the action brought about the end of the revolt.
Terry 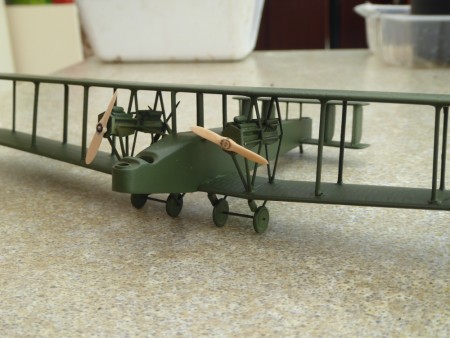